The Socio-gerontechnology network brings together scholars from various social science and design disciplines interested in critical studies of ageing and technology. The network started from a joint interest of scholars in Science and Technology Studies – beginning to see ageing as an important field for critical studies of technology – and Ageing Scholars – beginning to see digitisation and technology as important but under-researched elements of ageing and later life. Our aim is to provide critical social science insights into ageing and technology that will lead to better policies and designs for older people in a digitising world.

Globally, the network unites around scholars working in the area. It has emerged from loosely organised conference sessions since 2010 and was formalised during its inaugural meeting in Vienna in 2017. Since then the network organises an annual meeting through open calls. Previous meeting took place in Vienna (2017), Barcelona (2018) and Stockholm (2019).

Our book: Socio-gerontechnology – Interdisciplinar Critical Studies of Ageing and Technologes 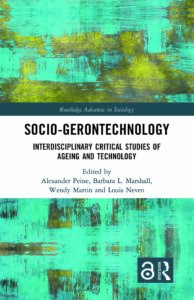 Social change in the twenty-first century is shaped by both demographic changes associated with ageing societies and significant technological change and development. Outlining the basic principles of a new academic field, Socio-gerontechnology, this book explores common conceptual, theoretical and methodological ideas that become visible in the critical scholarship on ageing and technology at the intersection of Age Studies and Science and Technology Studies (STS).
Get the book here!

Here you can see a short introduction to our book.